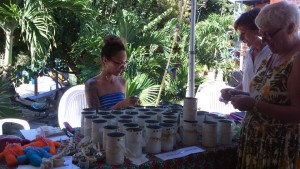 Christmas Bazar:
On Saturday 14th December 2014, the JJR Trust crafts team took part in the Christmas Bazar at the True Blue Resort at a sales point kindly donated by the management. They successfully sold a significant number of items hand made by the children attending Daniela’s arts and crafts workshops. All funds raised were donated to the Trust.

Annual General Meeting:
The Board of Trustees met on Wednesday 26th January 2015 for their AGM. Five resident Trustees were in attendance together with three guests. The main points arising from the meeting are as follows:-
1) The Board unanimously agreed to the appointment of Ms. Daniela Froehlich-Ruggle as a Trustee.
2) President Jean Robinson gave a full report on the achievements of 2014, together with details of the current financial status and donations.
3) The Trust currently has 60 teenagers registered on the programme of which 15 are studying at TAMCC. We are also supporting three students with scholarships to study in Cuba, Morocco and China. We could certainly support more such students if more funds are forthcoming.
4) A group of SGU students organized an International Food Fair at the University in 2014 and generously donated the significant funds raised to the Trust.
5) The Board recommended that we should monitor results, reports and progress more closely and require both students and parents to sign a ‘commitment declaration’.
6) The Trust will again organize the Garden Party fundraising event this year, currently planned for Sunday 7th June in George and Brenda Hood’s lovely garden.
7) The annual Summer Camp will be held in July probably over an increased number of days by popular request

Test Match Fundraiser:
The committee charged with organizing this event met twice during the latter part of March. Mr. Richard Strachan of Netherlands Insurance has confirmed his generous donation of their corporate hospitality box for the fourth day the cricket Test Match between West Indies and England to be held in George’s, Grenada between 21st and 25th April 2015. The JJR Trust will provide a mouth-watering lunch prepared by our President, with wines, drinks, tea and sandwiches, all inclusive for 28 paying guests at EC$225 per ticket, Sales are already well advanced. All proceeds to the cause. We are also trying to get Jean interviewed by the Sky Sports commentators to earn some valuable publicity for the Trust.

International Food Fair at SGU:
In a repeat of last year’s successful event, a group of caring SGU students will again organize this event on Saturday 18th April to raise highly appreciated funds for the Trust. Big-hearted international students doing their bit to help us help Grenada’s teenagers.

Garden Party:
The committee organizing the Garden party held an initial meeting on 5th March to kick-off the planning for the Garden Party fundraising event on Sunday 7th June 2015. A second meeting is scheduled for Thursday 9th April in the office of the Minister of Culture and JJR Trustee, Brenda Hood.