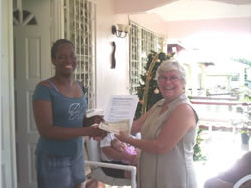 The J.J. Robinson Trust’s main fund-raising event this year — a raffle for holidays in Grenada, France and the UK — has raised nearly £5,000 (ECS 25,0000).
President Mrs Jean Robinson drew the winning tickets in front of an audience of UK friends and supporters of the Trust at a reception in Soberton Village Hall, Hampshire UK on Saturday, 30th September.

Mrs Robinson went on to describe the Trust’s work, helping some of Grenada’s poorer young people achieve their educational goals by providing grants to pay for text books and examination fees.

Among the cases she highlighted was a young woman who been helped to complete her pharmacy training and a young man who, after being helped to buy relevant text books, had secured a place at a University in Mexico.

Without the Trust’s help, neither of these two young people – nor the 50 or so others receiving ﬁnancial assistance — would be able to realize their potential, she said and concluded by expressing her warmest thanks to everyone who had bought tickets and helped to make the rafﬂe such a success.