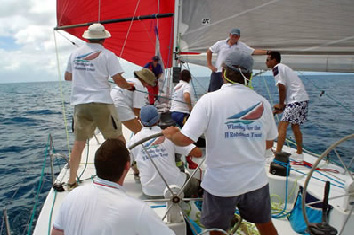 Yacht crew ropes in funds for the Trust

The 15 crew of lncisor, a UK-based yacht competing in the 2006 Grenada Sailing Festival, decided to combine sporting action with fund-raising for the Trust. They printed a special T-shirt which they sold to friends and family and collected cash from other crews competing in the festival. The total raised – including some large individual donations – was equivalent to more than US$3000.
The T-shirts, printed in Grenada, became a regular sight around the festival, generating considerable interest in the Trust and its work.